Watch out for premature aging! Each of the wrinkles on our face has a reason. Contrary to popular belief, wrinkles are not just a result of aging. In fact, many things we do without realizing it can age us prematurely. Here's what you need to know.

The aging of our skin is a biological process. In this process, aging and external factors are very important. Although the order of formation of facial wrinkles occurs in the same order and in the same regions for everyone in chronological aging, their intensity and rate differ from person to person. This is determined by the gender, racial characteristics, genetics of the person. On the other hand, the facial expressions we use when responding to events also play an important role in the formation of wrinkles on our faces. It is said that people who have more prominent lines by wrinkling their foreheads are people who tend to overthink. Are the lines on our forehead really a sign of aging? Dermatology Specialist Dr. Melda Özekinci said that the formation of wrinkles between the forehead and eyebrows is the main sign of skin aging, and that what causes this is the repetitive contraction of the muscles on our forehead and the decrease in the fat tissue over time.

Horizontal wrinkles on the forehead are more common in people who make a lot of mimic movements. Rarely, the appearance of wrinkles on the forehead in those younger than 30 is also due to the fact that these people make too many facial expressions and are exposed to the sun's rays too much. Özekinci said, "If you have vertical lines on your forehead, this is due to the habit of sleeping incorrectly." Of course, there is a reason for the wrinkles seen on the faces of people who make a lot of facial expressions. It is said that the lines formed between the eyebrows, which are especially common, appear more independently of external factors. Dermatology Specialist Dr. Melda Özekinci said, "As we age, the amount of collagen and elastin in the skin decreases. As a result, our skin becomes thinner and weaker as we age. As a result of frequent mimic movements, that is, the frown lines become deeper in this region." Özekinci said that this is due to the inability of the thinned skin to adapt to the changes in muscle tone in the region.

Laughing Too Much Also Damages Your Eyes!

So what causes wrinkles on crow's feet? Dermatology Specialist Dr. Melda Özekinci stated that the main reason for the wrinkles around the eyes, called crow's feet, is the repetitive contraction of the muscles around the eyes during laughing, and on the other hand, the thinning of the skin with age and the loss of adipose tissue in this area. In people who use mimics a lot, that is, those who smile a lot, these lines increase over time, and at the same time, premature aging may occur on our face due to external factors such as alcohol and cigarette consumption, exposure to the sun, bad eating habits, and lack of proper skin care. It is stated that upper lip lines are often caused by habits such as smoking and eating disorders.

Regarding this, Dr. Melda Özekinci said, "Although the lines between the crow's feet between the eyebrows and on the forehead appear as early as 30 years of age, the formation of upper lip lines normally occurs after the age of 40." Saying that the reason for this is the thinning of the lips, increase in the soft tissue around the mouth and weakening of the muscles due to age, Özekinci added that these wrinkles start earlier and are observed more intensely after smoking.

Emphasizing the importance of daily water consumption, Özekinci underlined that fine lines may occur as a result of drying of the skin if no more than 2 liters of water is consumed per day. Özekinci said that after water consumption, the nutritional factor is also important for our skin to look healthy and younger. Foods containing B, C, D, E vitamins should be consumed, and finally, heavy oily and sugary foods should be avoided. CAN FACE DOWN BY GRAVITY

Explaining the cause of wrinkles on the corners of the mouth, Dr. Melda Özekinci stated that the line between the corners of the nose and mouth, called nasolabial, can appear naturally during laughing. On the other hand, Özekinci mentioned that the wrinkles in these areas may be a sign of aging on the lower face, underlining the effect of gravity in the formation of wrinkles on the rim of the mouth, emphasizing that over time, gravity can cause sagging in this area. Stating that the lines on the bridge of the nose and on both sides of the nose are observed in people who constantly try to squint or smile, Özekinci said, "It occurs as a result of repetitive contractions of the muscles here, that is, mimic movements. These wrinkles on the nose have nothing to do with aging. So these lines do not appear in everyone. ' he said. 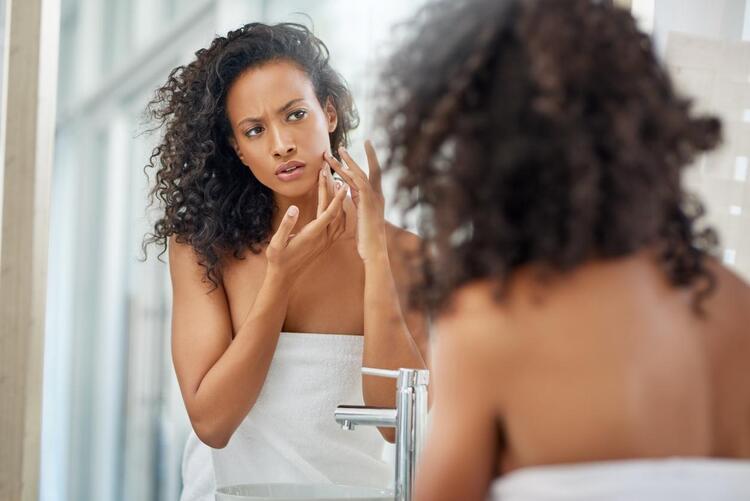